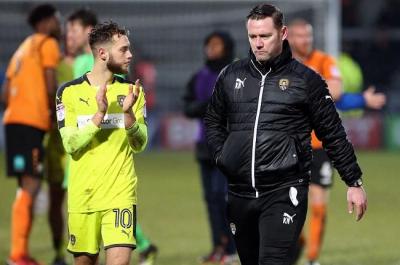 Kevin Nolan has expressed his happiness with Jorge Grant returning to goalscoring form for Notts County.

The 23-year-old midfielder scored his 18th goal of the season on Saturday as he broke the deadlock in an eventual 2-0 win over Stevenage at Meadow Lane.

Nolan had admitted last week how Grant was annoyed at his lack of goals in 2018, having netted 16 times before the turn of the year, and revealed how he had a tough week prior to the game.

“I spoke about Jorge before the game but he’s had a tough week with his family which I won’t go into,” he told the Nottingham Post.

“But we are all together and working hard to get back out of it. Saturday was a clear sign that we are starting to scrap our way out of it.

“I am delighted with that and Jorge’s attitude was fantastic. When he came on, he looked really good and had that clear mind back. I thought he took his goal fantastically well and I was delighted for him.”