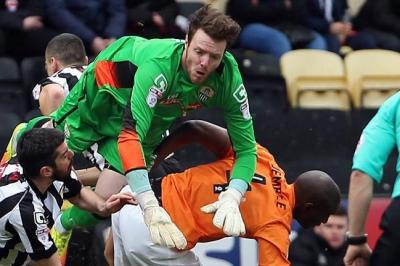 Kevin Nolan has spoken highly of Adam Collin's big throw, describing it as a "proper weapon", and hopes the goalkeeper can continue making use of it as Notts County seek a grandstand finish in League Two.

The Magpies came from behind to beat Colchester United 3-1 away last weekend, with Collin setting off a number of quick counterattacks by launching the ball upfield.

“He has got an arm on him which means he can throw it over the halfway line quite easily. When he uses it, it’s a proper weapon.

“I’ve probably taken it away from him a bit because when I came here, it was about controlling the game and making sure he slows it game down.

“But when he launches it, it gives us a lift and sets a bit of a tempo for us.

“We spoke about it at half-time at Colchester and said that Adam would get the ball and try to release it quickly as possible.

“But you’ve also got to remember the saves he made in the first and second half to keep us in the game.

“The lads then went up the other end and got the goals we needed.”