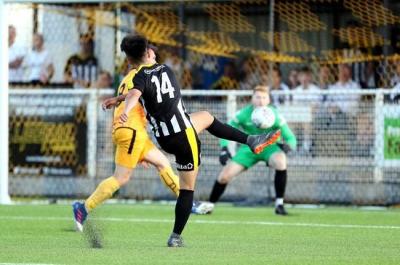 Kevin Nolan and Jon Stead have both praised Notts County first-year scholar Dongda He for his performance against Basford United.

The Chinese midfielder shone in the first half of the 3-1 victory against the Evo-Stik Premier Division side and scored the goal of the game with a terrific effort before half-time.

“We’ve got a lot of good players in that position, but he is someone who we can’t quickly thrust into the limelight,” Nolan told the Nottingham Post.

“We’ve got to be patient with him, but he did really well.

“He was around good players on Tuesday, but he’s shown he can handle it.

“What we can’t do is get carried away. What we must do is manage him like we have done with a number of these boys.

“Over the next few weeks you will be seeing him and he will be getting exposed to a lot of first-team training sessions.

“And hopefully we will try to get him on the field, but we have do right by us and them (young lads).”

Stead added: “He was brilliant and a real livewire.

“Dongda wants to be on the ball and wants to try things. That is key because sometimes young players can play within themselves and be a little shy.

“But he wanted to impress and that’s only to be admired. There are a couple of things where you thought 'just calm down a little bit'.

“But you want that exuberance. He might put two or three over the bar, but then come up with a terrific strike.”