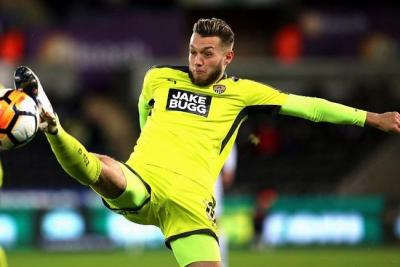 Kevin Nolan has given his thoughts on Notts County's upcoming League Two clash at Grimsby Town and confirmed that Jorge Grant is in contention to make the squad.

The loanee was out with an ankle injury as the Magpies ran out 4-1 winners over Yeovil Town last weekend but has made a swift recovery.

With so much resting on Saturday's trip to Blundell Park, Nolan is pleased to be able to call on his top scorer as Notts seek to get into the top three.

"Jorge trained today and everything is fine," Nolan told the official Notts site on Thursdsy. "We feared the worst when it happened, but he’s a good healer and he’s got that determination.

"He took a few hits today, so I’m confident he’s back and raring to go. Jorge was rightly named in the PFA Team of the Year. He’s been brilliant all season long and you want players who have contributed as much as he has available to you.

"The lads have put themselves in a fantastic position to put the pressure on and we’ve secured a playoff place, which is an unbelievable achievement considering where we were 15 months ago. All we’ve got to do is keep winning. We want to build momentum, have a strong end to the season and we’ll see where we are.

"But we’ve got Grimsby in the way. They’re not mathematically safe and it’s their last home game of the season, which always has a good feeling about it. It’s another tough one - but it’s another we’re looking forward to."