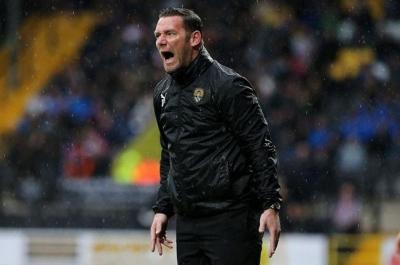 Kevin Nolan has launched an astonishing tirade against the Notts County online community and social media, calling on "some people" to "have a reality check".

Speaking at his pre-match press conference ahead of the Magpies' trip to Carlisle United on Saturday, the manager aired his grievances about what he felt were knee-jerk reactions from fans.

“There’s a lot said about us that is very untrue,” Nolan is quoted by the Nottingham Post as saying. “But I only hear it because I am not on these sites. I only hear it from my staff or the players.

“If they don’t want to see winning football, then don’t come to Notts County because that’s what we are trying to do.

“For people to be complaining how we play given the club has lost one home game in a calendar year, then there’s not much you can do.

“We only won three games in the previous calendar year compared to what we’ve done now so some people have got to have a reality check and look at themselves in the mirror if they are criticising.”

Last week, Pride of Nottingham published photos which were sent in by a fan which appeared to show Liam Noble in training at Basford - Notts subsequently announced that the midfielder had rejoined the club.

Despite the training sessions being open and accessible to supporters, Nolan continued his tirade, criticising the individual who took the photos.

“Liam Noble comes and trains with us for the first day and somebody turns up, and the next minute the pictures are on the internet within an hour or two.

“That would never have happened a few years ago. But they didn’t know what was going on yet still wanted to put something out there.

“I couldn’t believe it when I saw it. That person, because we know who it is, will come back to training ground and then want us to respect him and not tell him to go away.

“When he asks the players for selfies what does he expect them to say?

“They will all expect us to say ‘yeah, no problem you can have your photograph’.

“And that’s my biggest issue with social media. People will come and ask for your picture, then they will sit there on Twitter or whatever, type something, and have a rant.

“You only have to look at Arsenal Fan TV to see how it gets millions and millions of viewers.

“It’s crazy. It makes headlines in the papers and it’s just taken over. It’s something as a manager I have to deal with and all I can ask of the fans is to be respectful.

“A lot of my family are on social media so how is it going to feel for them to see something written about me. It’s hurtful for them and that’s what people have got to realise.”