Kevin Nolan: 'Liam Walker got given an opportunity to play elsewhere' 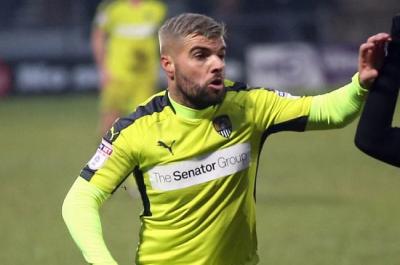 Kevin Nolan has admitted that letting Liam Walker leave Notts County was a tough decision but could not stand in his way after being given an opportunity to play elsewhere.

The Gibraltar international left Meadow Lane on Monday having had his contract terminated by mutual consent, having made just 19 appearances this season and failing to make the squad altogether in recent weeks.

"Liam got given an opportunity to go elsewhere," Nolan told the Nottingham Post. "He rang the club and asked if he could go to pastures new and I didn’t want to stand in the lad’s way.

"He’s been a fantastic pro and just didn’t get the opportunities he would have liked and that’s because I thought there were players ahead of him in the team.

"He’s got great quality and I know wherever he goes he’ll do well because of the way he is.

"I had to make a tough decision and I think is for the best for Liam and for us moving forward.

"I don’t know all the ins and outs of where he’s heading next, but I said for as long as he is here then he is more than welcome to come and use the facilities, and if he needs to train.

"We can either put him with the lads or with the younger group. It was unfortunate for Liam because I think he expected a bit more than when he signed, but that’s the way football goes.

"But I wish him well and good luck in the future because I believe he will go somewhere and succeed."