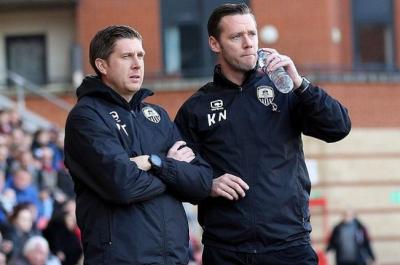 Kevin Nolan has claimed that Notts County did enough to come away with all three points in their League Two encounter with Stevenage on Saturday.

The Magpies fell behind at Broadhall Way through Danny Newton's 38th-minute strike, but levelled through Elliott Hewitt in the second half.

Stevenage then found themselves repelling numerous attacks from the visitors and were lucky to hold out until the final whistle for a 1-1 final score.

"We could have won it and I don't think people would have been able to argue if we did," Nolan told the official Notts site. "We dominated the second half.

"I was disappointed after the start we made. We were on top in the first 10-15 minutes but took our foot off the pedal a bit and let Stevenage into the game.

"They scored from a third phase from a free-kick which we gave away sloppily so we were disappointed to go in 1-0 down at half-time. We have to stop doing that.

"But we have to respect the point. I'm delighted with the squad. They are where they deserve to be.

"In March (the 3-0 defeat) we capitulated after going 1-0 down and we didn't look like getting back into the game.

"But now we have a mentality whereby we want to work our way back into the game and, once we do, go to win it.

"The players are in a good place at the minute and we have to continue working hard and keep doing what we do.

"You saw a lot of quality from us - I am delighted with some of the play."