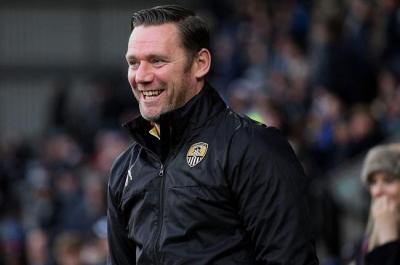 Kevin Nolan has hailed Notts County's "fantastic win" against Colchester United and said his players are showing the right character to be towards the top of the league.

Shola Ameobi's penalty had given the Magpies the lead but substitute Sanmi Odelusi looked to have salvaged a point for the U's with his 89th-minute strike.

However, there was time for more drama as Ryan Yates glanced home a header to claim all three points for Notts for a 2-1 win and keep them level on points with top-placed League Two side Luton Town.

“This is a fantastic win for us because Colchester are a good outfit,” Nolan told the official Notts site. “It’s a seven-point week for us and I am absolutely delighted with it.

“They played us really well in the first half and we couldn’t get any momentum or creativity going.

“I thought we were well worthy of the win, but it just shows you the character that we kept going after conceding such a late equaliser.

“I’ve spoken about this team’s character and what they have showed me is they have it in abundance and togetherness.

“They have a willingness not to get beat and you have seen that consistently throughout the season.

“They are embracing being at the top end of the league. They are sticking together when we are not playing so well and that is a great trait to have as a team.”

Share your thoughts about this news story on Football Manics by signing up for FREE to the website, visiting the forum and joining the chat with fellow football fans.