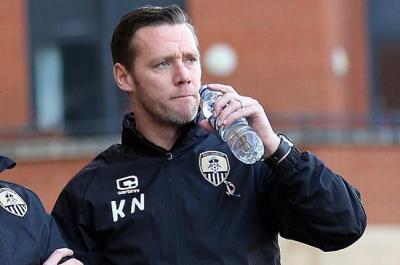 Notts County manager Kevin Nolan has admitted that his players "were all disappointed in the dressing room" following their goalless draw with Yeovil Town on Saturday.

The League Two fixture at Meadow Lane saw the visitors defend stoutly, with the Magpies failing to break them down, and almost struck a late winner when Alex Lawless was denied by Adam Collin.

Despite the disappointment of failing to get all three points, Nolan admits that his charges seeing a stalemate as a bad result shows how far they've come from when he took over amid a 10-match losing run.

Nolan told the Nottingham Post: "We have to look at this result in the right way in the fact they have respected us. They have come to Meadow Lane and put 10 men behind the ball and made it difficult for us.

"When we did get into the final third, we found it hard to break them down and our quality wasn't what it was of previous weeks.

"But it felt like one of those days when the ball just wouldn't drop for us in the box and when it did it probably fell to the wrong person.

"The lads were all disappointed in the dressing room and I was delighted with that because it shows how far we have come in such a short space of time.

"The fans were fantastic again and while there were lots of positives to take out of the game, the disappointment was we didn't get the win."

Share your thoughts about this story on Pride of Nottingham by signing up to the website, visiting the forum and joining the conversation.