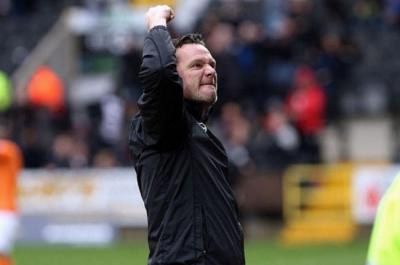 Kevin Nolan has hailed his Notts County charges for putting in a great performance against Everton Under-21s in the Checkatrade Trophy.

The Magpies, playing before a crowd of just under 1,500 at Meadow Lane on Tuesday night, took the lead via Jonathan Forte and consolidatedit via Haydn Hollis.

Although Toffees substitute Anton Donkor halved the deficit in the second half, Notts saw the game out to claim a 2-1 win, keeping their momentum going after their 2-0 win over Chesterfield in League Two at the weekend.

Nolan told the official Notts website: "We were really good in the first half. I thought we dominated and were deservedly 2-0 up.

"There was some lovely interlinking play here and there but in the second half, when Everton changed formation to 4-4-2, we didn't get a handle on it as quickly as I would have liked.

"They went a lot more direct and caused a lot of problems.

"Everton are known for bringing through really good youngsters and there are clearly more there based on what we saw out there tonight.

"We knew they would throw everything at us but we stood up to it. The lads responded well and showed resiliency not to concede another goal.

"I am delighted with the outcome from the last couple of games and we are all now looking forward to the Wycombe game at the weekend."