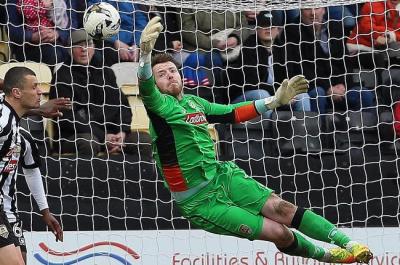 Collin made up for failing to save Jabo Ibehre's shot for the hosts' opening goal with a great save from the striker one-on-one, while O'Connor impressed after coming off the bench for the last 25 minutes.

"I think Adam will be disappointed and he has already held his hand up about the first goal," Nolan told the Nottingham Post. "But you have seen a reaction from him because he then saves a one on one with Ibehre later on in the game.

"Adam has been absolutely first class since I came in and the problem with playing goalkeeper is that if you make an error you are often punished for it. But when you look at it, he has saved us the three points.

"Although the first goal went in, the save from the one on one was absolutely fabulous. He won't be getting any gripes from me, but he'll probably beating himself up more than I will be having a go at him.

"Michael O'Connor was a real positive coming on for us. It would have summed up a fantastic afternoon for him if he had scored. He definitely made an impact on the game and it was a massive one."