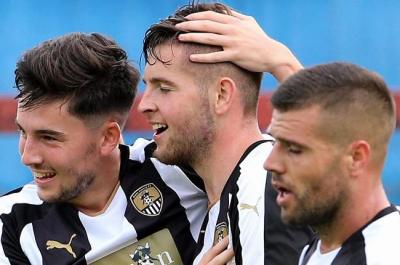 Notts County boss Kevin Nolan has thrown his support behind young defender Pierce Bird and exonerated him from his mistake against Lincoln City.

The 18-year-old made his competitive Magpies debut in Tuesday's EFL Trophy tie at Sincil Bank and impressed alongside Haydn Hollis at the back.

However, Bird was unlucky to concede an own goal when Josh Ginnelly's cross caused havoc in the box and it was diverted into the County net, on the way to a 2-1 defeat.

“I thought he did really well,” Nolan told the Nottingham Post.

“He was with three lads who have had a lot of experience, he won a lot of headers and did everything right.

“He made the right decisions more often than not and looked a composed figure at the back.

“I was delighted with him, but we have to get him fitter and used to this tempo and playing at this tempo for a long time.

“He’s a young boy who has stepped up, but he should be delighted and his family should be so proud of him.

“He has proven how much he has come on in leaps and bounds in just the few months he has been here.

“It’s the next step for him now and we have to make sure we keep working hard. He has to learn the game and make sure he stays around us if he does go out on loan."