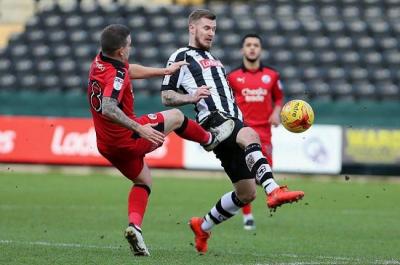 Kevin Nolan is optimistic that Notts County duo Adam Collin and Michael O'Connor will come back to the “top of their game” after providing an update on their return from long-term injuries.

O’Connor has been sidelined since April because of a serious knee injury, while Collin has been absent after suffering a knee injury of his own in last month’s win over Barnet.

"Michael has been on an anti-gravity treadmill which has allowed him to run in straight lines," Nolan told the Nottingham Post.

"Losing him was a massive blow to us and having him in the squad this year would have put us on another level because of his quality and what he brings to the team.

"Adam's swelling has gone down and he's meeting with the specialist so we will have more news soon.

“We're hopeful he will come out of the brace so he can start getting back to work sooner rather than later.

"He has been fantastic since I walked through the door and he has taken his performances to another level this season after finishing last season strongly.

"The most important thing is we get them back at the top of their game and we are not putting them under any stress to ensure there is no recurrence of their injuries.

"They're two massive characters but it's brilliant to see how well the lads have coped without them."