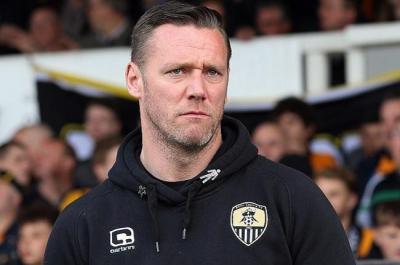 Kevin Nolan has given his assessment of Notts County's performance in their pre-season friendly against Basford United, describing himself as "reasonably pleased".

The Magpies won 2-0 at Greenwich Avenue on Saturday, as Dan Jones opened the scoring when his free kick found its way through a crowded penalty area and into the net.

Notts then doubled before the break when midfielder Alex Howes skinned his man and slotted beyond the Basford keeper.

A reasonably straightforward afternoon was however hampered  y an injury to Curtis Thompson in the second half, as he felt a slight tweak in his hamstring.

"I was reasonably pleased, I feel we could have punished them more in the second half," Nolan told the Nottingham Post.

"In the first we played to their strengths by giving them too many free-kicks which allowed them to put the ball in to our final third and around the box.

"It's another clean sheet, but there are a few things we can start drilling into the lads to work on and to think about going forward.

"I just said to the lads that I'm pleased we didn't concede and we can drip feed into them a few aspects we want them to think about.

"There are things we can get better at. We can do that when we get them on the training pitch. Apart from Curtis Thompson, we've come through unscathed."