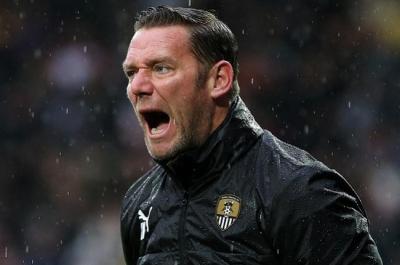 Tuesday's rescheduled League Two game proved another forgettable evening for the Magpies as they ended the game pointless and down to nine men.

Matty Virtue was sent off for a second yellow card before Ross Fitzsimons lashed out at a Crawley player for a red card and a penalty which was converted by Harry Kewell's side.

“I was angry for all the wrong reasons,” Nolan told the Nottingham Post after the game.

“I was very disappointed to lose the game and when you look back, it’s the little decisions that referees get wrong are costing us at the minute.

“One of those was Matty Virtue’s yellow card. It’s not a yellow – everybody can see it.

“The lad has won the ball cleanly. Then for the second red, it’s a goal kick and not a corner.

“But listen I am not going to try to look after Ross Fitzsimons in this because we all take accountability for our own actions.

“It has cost us a point, but if it’s a goal kick then it doesn’t happen.

“But I’ve said to the lads that to suffer back to back defeats for the first time this season shows how far we have come.

“I am delighted with that. I don’t want to keep harping on about referees but he simply wasn’t good enough to referee this game.”