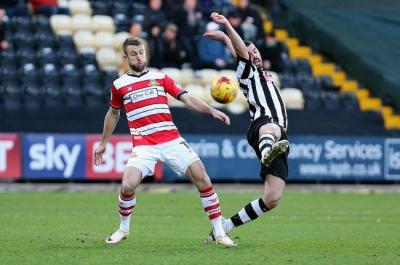 Notts County boss Kevin Nolan has described Richard Duffy as his "most outstanding" player of the season and claims that "people giving him stick don’t know too much about football".

The defender has flattered to deceive on many occasions this season but put in a good performance as the Magpies ran out 2-1 winners over League Two promotion rivals Coventry City at Meadow Lane.

In recent weeks, some fans have been calling for Duffy to be dropped in favour of a central defensive partnership consisting of Shaun Brisley and Ben Hall.

Nolan, however, says the former Wales international has had an amazing season in the heart of the back-four.

“Duffer has probably been the most outstanding performer all season long,” he told the Nottingham Post. “He goes under the radar and some people give him stick.

“I think it’s because the way he looks more than anything because he doesn’t look like a typical League Two centre-back who is 6ft 4in and heads everything.

“I’ve been in the game a long, long, time now and I don’t understand a lot of the stick that players get.

“People giving him stick don’t know too much about football. That’s my view on it because if you’re a footballer then you know what he brings to your team and what he does.

“His reading of the game is first class and he’s been brilliant since I came in. His character and the way he leads people is a credit to him.

“It’s a fantastic attribute he has got and that’s why he’s been ever present for me all season.

"He has been one of the best players and he and Bris have had a fantastic partnership.

“Then Ben Hall comes in and he has put them under real pressure to perform because he’s waiting in the wings.”