Kevin Nolan: 'Scott Loach loan will let us make a decision on his Notts County future' 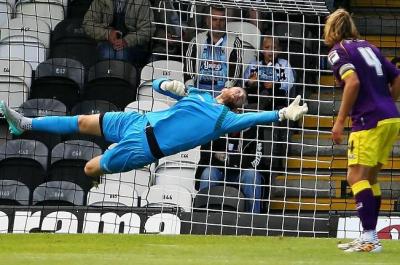 Kevin Nolan says Scott Loach's loan move to York City will enable him to keep tabs of the goalkeeper in first-team action and make a decision on him at the end of the season.

The 28-year-old former England Under-21 international, who has made just seven appearances for the Magpies this season, sealed the switch to Bootham Crescent on Wednesday.

Nolan admits that Loach, whose deal at Meadow Lane is up at the end of the season, was desperate to play first-team football, but has been "first class" in biding his time as Adam Collin's deputy.

"Loachie was desperate to play and be number one somewhere so he could get some games under his belt," Nolan told the Nottingham Post.

"After York rang us yesterday (Wednesday) we just thought it would be an opportunity for him to go and do that.

"We can have a look at Joe Searson as well and then we can make a decision on them come the end of the season.

"I must admit Loachie has been first class since I came in. There's not been one whimper. All he's wanted to do is play games.

"But with Adam's form he's found that difficult. When York came along, I just thought it would be best for us and for him to go and play.

"It gives me a chance of getting a few tapes of him playing week in, week out, and then we can make a decision on him."

Share your thoughts about this news story on Pride of Nottingham by signing up to the website, visiting the forum and joining in the chat.