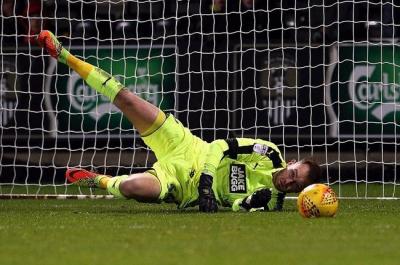 Notts County manager Kevin Nolan has stuck up for goalkeeper Ross Fitzsimons following his red card in the 2-1 defeat to Crawley Town on Tuesday.

The 23-year-old was sent off in injury time for kicking out at Mark Connolly after claiming a corner, also giving away a penalty which Josh Payne converted.

“What I’ve said to Ross stays with us,” Nolan told the Nottingham Post.

“Ross has been absolutely fantastic for me since he joined the club, but he knows he has done wrong.

“I am not going to protect him, but what we will do is rally round him and make sure he learns from this mistake.

“He’s still a young boy and this is his first major run in a team in the league ever.

“He’s let a silly push rattle him and it’s cost him. He’s probably going to miss three games and it cost us a point.”