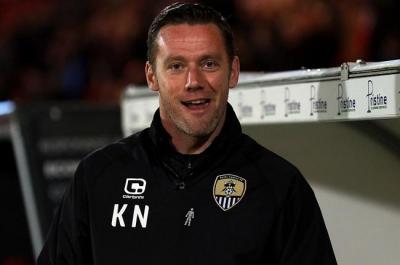 Notts County boss Kevin Nolan has given his opinion on several current topics, including pre-season, the recently-released League Two fixtures, transfer window activity and higher-league loanees such as Jorge Grant.

It is low season within English football at present as many players and staff are on holiday, recuperating from the season just gone and with at least a week until pre-season gets underway.

However, plenty of work is being done behind the scenes, with contracts being signed (or turned down) by players already on a club's books, as well as thrashing out deals to bring new players in.

And this week, the EFL fixtures were released, giving fans the chance to begin planning their excursions on the road to follow their beloved teams (and cancel any other plans that may have got in the way of their beloved football).

Nolan is about to embark on his first ever full season as a manager, so for him it's relatively uncharted territory.

Speaking to the Nottingham Post, he touched on a number of topics.

"I don't want to place too much emphasis on it, but I always believe in hitting the ground running.

"I've got that from Sam Allardyce. He massively believed in having a good start and that's why all that preparation will be going into the first game.

"They are the two games that matter so that Forest (pre-season friendly) game, while it will be a fantastic occasion, will be about the boys getting those minutes in and making sure they are good minutes too.

"We want to be ready, we don't want injuries and we want to make sure we keep moving forward, making sure that everybody is getting fitter.

"Then come August 5, we are ready to explode and hitting the ground running."

On the Carabao Cup first round clash at Scunthorpe United

"It is a difficult one but it will be a good test for our boys to see if they have the ability to match them.

"It is a game we will go and enjoy and hopefully give a good account of ourselves to get through to the next round."

On players and current transfer dealings

"We've kept everybody that we have wanted to retain from last season's squad.

"Now it's about looking at specific positions, particularly the spine of the team.

"We are also looking at signing a left-sider so we are talking to people and seeing if they want to come here.

"As I've always said I want people who want to play for this club and I don't want to be negotiating for £50 here or £100 there.

"I want a player who has a passion and a desire to play for Notts County."

"I am absolutely delighted for Jorge (on his new Nottingham Forest deal).

"I've built up a great relationship with him and I think the boy is a special talent.

"He thrived in the environment that we created for him here and I spoke very well with his dad in the office and on the phone.

"He is going to be one of those boys that I will continue to speak to throughout my career I think.

"He knows what is expected of him. He's got a lovely family behind him, he's got a little bit of nice arrogance about him.

"It's what he needs to become a top player. He's got fire in his belly and you have to embrace that.

"But I am hoping if Jorge gets made available for loan again that he comes back here."

On other higher-league loanees

"We want people to come here and thrive so we can have that great relationship with Nottingham Forest.

"We've already built up good relations with Arsenal, Hull and West Brom after the loan signings we made from them last season.

"That's what you want, but for me Jorge was obviously the pick of the bunch.

"He's a lovely lad and I am hoping that he goes over the road and speaks highly of us.

"Anyone who is coming through at Forest and is sitting there wondering about us, then they can go to Jorge and ask him about us.

"I am sure he will say 'get yourself over there' because we will make players better."