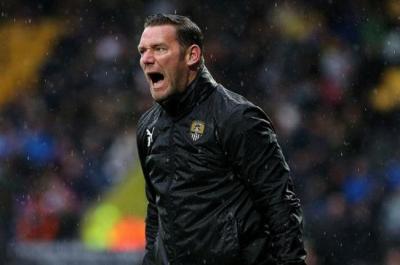 The Magpies succumbed to an injury-time goal by Alex Nicholls as they left the Hive Stadium without a point to show for their efforts.

Notts have lost further ground on the top three with defeat to the division's bottom side and Nolan was not happy in the slightest with his charges.

“It wasn’t tough, it was poor - simple as," the manager told the Nottingham Post after the match.

“My players couldn’t pass a ball to each other and I told them afterwards that this is the first time I won’t protect them.

“That was not good enough for me. We improved for five to 10 minutes in the second half, but then they went back to doing whatever they wanted.

“That’s why they didn’t get the success they did. In the five minutes we asked them to do what we told them, they got a shot off and so on.

“I am not accepting it and they have got to book their ideas up and quickly otherwise we will have more afternoons like that. It seems to me they’ve got too soft and started to believe in their own hype.

“I am devastated because I don’t think I’ve seen a much poorer performance from our lads. What we ask of them and what we want from them, it looked like they just didn’t want to.

“The amount of backchat I had won’t be happening again. It was over little things, and I was only trying to help them. But it seems they know best at the minute.

“There will be changes and that’s why I’ve got a squad. We will be working hard and if they don’t want to listen then they can come and see me, and we will find somewhere else for them.

“It certainly won’t be in my first team squad if they don’t start listening. There were a few choice words, but I am just going to make them watch the game and see what they think.”