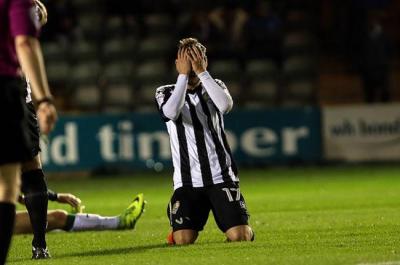 The 23-year-old continues to be on form for Notts County, taking his tally for the season to 16 with a brace in the 4-1 win at Morecambe on Boxing Day.

Prior to the two goals at the Globe Arena, Grant had not scored in the league since a two-goal haul against Cheltenham Town on November 11.

Grant's impact has been so significant at Meadow Lane that the rumour mill has gone into overdrive regarding whether he might return to parent club Nottingham Forest or get sold on.

Although Forest have stressed that the attacker is not being recalled in January, speculation continues to circulate about his immediate future.

“There has been a lot of speculation about Jorge and I really do feel it has affected him,” Nolan told the Nottingham Post.

“People have got to realise that he is a young lad still making his way in the game.

“We’ve had numerous chats over the last week or so. I said let’s not worry about anything that’s going on.

“Just worry about what you do on the pitch and when he plays with that freedom, as we saw at Morecambe, some of the stuff he does was absolute quality.”