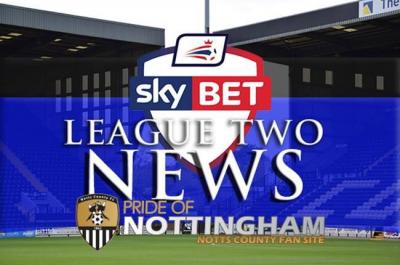 - 10 games in League Two, including Notts County's trip to Cheltenham Town, were postponed as a result of the blizzard-like conditions.

- Sol Campbell said he was waiting to hear back from Grimsby Town about their managerial vacancy.

- Unfortunately for Sol, Grimsby ended up appointing former Burnley Under-23 boss Michael Jolley as their new manager on a rolling contract.

- Crewe Alexandra defender Eddie Nolan triggered a one-year contract extension at Gresty Road until the end of the 2018-19 season.

- Also relating to Crewe, the club restated their position that nobody at the club was aware of Barry Bennell's abuse of young players until their former youth coach was convicted of sexual assault in Florida in 1994.

- Yeovil Town midfielder Jake Gray will miss the remainder of the season with an ankle injury - he had to have surgery after rupturing ankle ligaments in the Glovers' 1-0 defeat by Carlisle on 24 February.

- Newport County manager Mike Flynn says he is "quietly excited" about the prospect of a new deal with captain Joss Labadie.