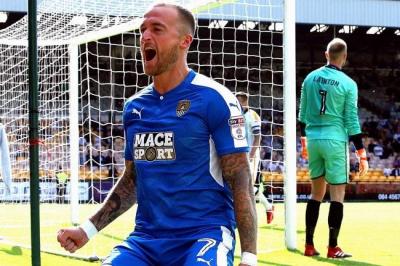 Lewis Alessandra has expressed his delight with grabbing the winning goal for Notts County at Port Vale, but also hailed the togetherness and effort of the whole team.

The winger came off the bench on Saturday at Vale Park and, with his first touch, bundled home Jorge Grant's cross to open the scoring with what proved to be the winner.

However, the entire Magpies setup had to be at their best when they fell to 10 men following three substitutions and Shaun Brisley's departure due to injury.

“That’s what you want to do as a substitute - come on and make an impact and I was happy to do that within 30 seconds,” Alessandra told the official Notts site.

“I want everyone in this team to be doing well, but I’ve done my job today by coming off the bench and making an impact.

“It would have been nice to cap off a great day with a second goal but we’re more than happy with three points.

“Victories like this mean a lot when you’ve had to really work for it, as you could see by the reaction from the lads at the end of the game.

“The big thing in this team is the togetherness. There are five or six captains which is really good for us, especially with the blend of youth in the team.

“The manager has built a team full of great lads. We’re a tight-knit group and we enjoy working for each other.

"The camaraderie in the group is fantastic and, with regards to strength in depth, this is the best League Two side I’ve played in.”