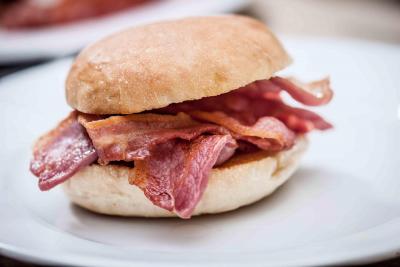 Notts County manager Mark Cooper has admitted he took it easy on the players the day before the Newport County game by not having a training session and getting them bacon sandwiches on the way to the ground.

The Magpies beat the Exiles 1-0 at Rodney Parade on Saturday, Genaro Snijders's goal stopping the rot after three League Two defeats on the trot.

"We didn't train on Friday," Cooper told reporters in his post-match interview.

"We got the players a bacon sandwich, got them on the bus and tried to keep it a little bit lighter.

"It is always nice to win a game of football, it's a better feeling in the changing room and makes for a better journey home on the coach.

"I thought the players had a go and that's all I have been asking for."

Cooper also criticised the Rodney Parade pitch, which was sandy and with parts of it completely bald.

"It wasn't pretty but the pitch is a disgrace for a Football League club," he continued.

"I am sure they will want to do something about it next season because they shouldn't be allowed to play on it.

"It's difficult when you have got one team playing rugby on it, but two? Well, they have to sort it out - players' careers are on the line."

Share your thoughts on Notts County's win at Newport County and on Mark Cooper's managing of the team by signing up to the Pride of Nottingham website, visiting the forum and joining the conversation.