Match Highlights: Was it a penalty in Notts County, Mansfield Town draw? 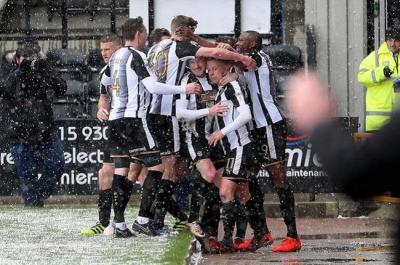 Notts County came so close to claiming a first league victory against Mansfield Town since 2005 but ultimately fell just short as the opposition scored a late penalty in what ended as a 1-1 draw..

The big League Two derby, which kicked off at 1pm, saw the Magpies take the lead midway through the first half at a snowy Meadow Lane.

Terry Hawkridge was the man who scored the opener, a scrappy goal bundled home from close range after Conrad Logan had palmed Shola Ameobi's header back out into danger.

The Stags improved in the second half but Notts had appeared to have done enough when the clock ticked past the seven minutes of added time.

But the game continued and, in the eighth minute, Lewis Alessandra's handball in the box - though even that is contentious - led to a penalty, which Kane Hemmings converted for an ill-deserved share of the spoils.

Notts County have uploaded the match highlights, and we've shared them on here for you so you can relive the action from the game.