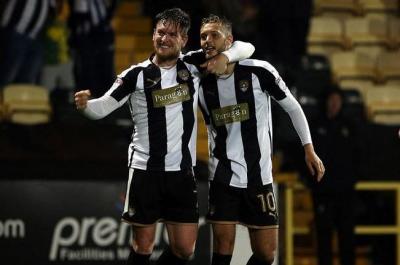 Matt Tootle has praised Notts County's fans for spurring the players on in their FA Cup victory over Bristol Rovers at Meadow Lane.

The visitors led 2-0 after the first 15 minutes thanks to goals from Liam Sercombe and Stuart Sinclair to seemingly set up a long, torrid evening for the Black and White Army.

However, the Magpies rallied round as a quickfire brace from Ryan Yates edged them level by the break, setting up a second half in which the hosts had their opponents under siege.

Ultimately a further two goals, from Jon Stead and Jorge Grant, saw the League One side knocked out of the competition, while Notts are in the hat for round two.

“But our fans stuck right behind us and spurred us on to turn the game around. There was such a positive atmosphere inside the stadium.

“Even at 0-2 we were still confident of winning the tie due to the home form we have built under the gaffer. The patience and support of the fans played a massive part.

“They have been brilliant home and away all season and, as players, we’re determined to repay that by continuing to compete at the top of the table and by going as far as we can in the cups.”