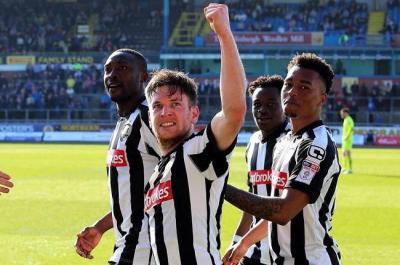 Matt Tootle has praised Kevin Nolan for the support shown to him since the manager's arrival at Notts County in January.

The left-back has been speaking out about his problems with mental health and how they threatened to derail his career at one point.

In May, Tootle revealed revealed how he had enjoyed a superb season at Crewe Alexandra going into the summer of 2014, but "something then just triggered" in his mind while he was on holiday in the off-season.

Over the last few weeks, the 27-year-old has spoken to the likes of talkSPORT about the topic, which has prompted waves of support from people who have been affected by mental health issues.

In an interview with the official EFL site, Tootle said: “The reaction has been unbelievable – for me it has been quite emotional.

“From the place I was in to be able to speak out now, I take great pleasure in trying to help people. I know what some of these people are going through and to hear about how much I have helped is really good.

“Since the new manager has come in he has been unbelievable with me. He knows me and what I need. When I came back after the summer he and the assistant manager both congratulated me telling me how proud they were that I’d come through this.

“I was worried they would ‘tag’ me... but if anything they saw it as the opposite, which was refreshing to hear. I like to think that they’ve seen I’ve come on leaps and bounds and that there is much more to come from me as well!”