Noor Husin: 'Kevin Nolan one of the main reasons I joined Notts County' 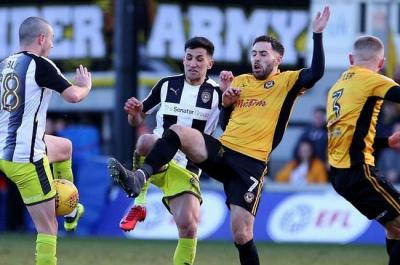 Noor Husin has stated that Kevin Nolan was instrumental in his decision to join Notts County and feels he can progress as a player under the former Premier League stalwart.

The 21-year-old was on the books of Crystal Palace but opportunities were few and far between for him at Selhurst Park, especially once Sam Allardyce was named as their new manager.

Husin caught Nolan's eye when he scored against them whilst on loan at Accrington Stanley and, when Palace made him available for transfer in January, the Magpies duly snapped him up.

"Kevin gave me a bit of banter about scoring against us, but he is one of the reasons I came here. He has played at the top level and my aim is to get there. I thought I could progress under him and take my game forward.

"He has definitely helped me so far. I am playing regularly and he can see the game through my eyes because of the position he played. I am happy taking tips off him and understanding different things I can improve on.

"Notts County is a massive club in League Two as well. I just thought it was the right time to go down a few levels and build my way back up."