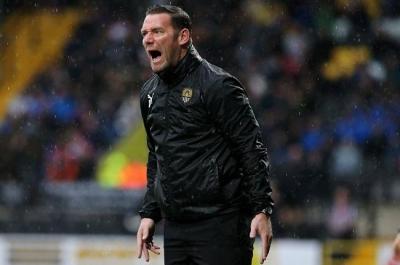 Kevin Nolan has urged Notts County to keep calm and not deviate from the norm when it comes to preparing against Cheltenham Town.

The Magpies face the Robins - who sit 16th in League Two - on Saturday afternoon at Meadow Lane, and Nolan admits his charges will have to "earn what we get".

"The way Gary's teams play, he won't be giving us anything for free," Nolan told the official Notts site. "We will have to earn what we get.

"We have to respect the fact teams are going to raise their game against us because we are top of the league but, for me, nothing changes.

"The players will be given details about strengths and weaknesses of the opposition, but it's about us and focusing on becoming better as a squad and team."

Moving on to who could replace the suspended Elliott Hewitt, Nolan continued: "There are a number of players who can come into that position now. That's what's great about this squad.

"If you get a knock and miss a game you might not get your place back for three or four weeks and you end up sitting on the bench waiting for your chance.

"Rob Milsom had the same situation a few weeks ago when he picked up an injury, which allowed Elliott to come in - and he's done fantastically well.

"But it's not as clear-cut as one coming in for the other. We have plenty of options and can change systems.

"We're looking at a number of things we can do for the weekend and whoever is lucky enough to get the shirt will want to put in a strong performance so they keep their place for the next game."