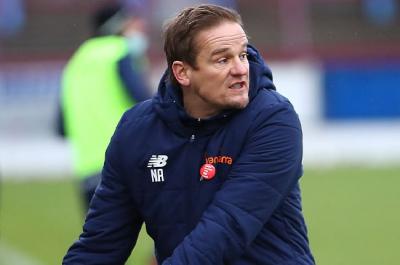 Notts County boss Neal Ardley, says footballers ought not be given particular treatment with regards to getting a Covid immunization.

The magpies have seen neighbouring rivals Chesterfield go under examination after a portion of their players - thought to be three altogether - got an immunization.

Ardley was inquired as to whether he suspected players ought to get their first punches rapidly after Notts saw their season hampered by sessions Covid in the crew.

Speaking to BBC Radio Nottingham he said: "I don't think they should, no. You've got to think about the bigger picture.

"It's about the country, not just that, the world. We can get our country in order, but the world won't get back to normal unless we help other people so I think we've got to get as many people that need to be safe, safe. I'm pretty sure footballers come down the pecking order in respect to that.

"I know players can't socially distance on a pitch, that's why I think testing is important for football teams to identify cases early and keep the bubbles as safe as possible.

"There's too many people that are important ahead of footballers."

Then, Ardley accepts his players are substance to play regardless of the characteristic dangers of close physical game in a pandemic. In any case, he says players are allowed to pull out, referring to the case of striker Wes Thomas, who would not train with the group over security fears.

"We've had the incident with Wes Thomas so we know there is that fear. We've made it clear to our players that if anyone has concerns they won't be judged on whatever their concerns are, I think 80 to 90 per cent of the squad have had it, but I think the boys feel we're doing things right to keep our bubble safe and we feel we can keep playing. He said.