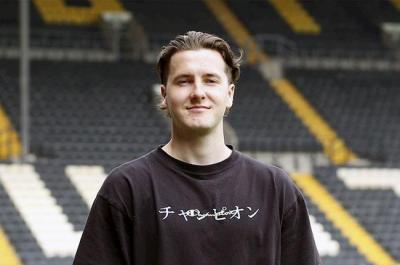 The 22-year-old arrives at Meadow Lane after leaving AFC Bournemouth as a free agent, having signed a two-year-deal with the magpies.

Vincent has played out on loan in recent seasons, having spells with Torquay United, Scunthorpe United and Walsall. The midfielder links back-up with Kyle Cameron and the pair helped The Gulls earned promotion to the National League in 2018/2019.

Speaking to the Notts County media team, Frank Vincent said: "I'm obviously very buzzing to get the deal done, it's been a bit of an anxious few days.

"Trying to get it all sorted but yeah just buzzing to get it over the line. Its such a big club and just can't wait to get started. I'm left-footed, I'm a midfielder. I'm a technically gifted player, I like to pass the ball, the combinations one-two's." he added

"The way i play is the way the gaffer wants to play here, lots of possession based football, but not just that, I like to pass forward, I'm not just here to get the ball and pass it sideways.

"I think I'm a risk taker in the right moment and yeah just looking to get the ball, pass forward, start attacks and i still haven't got a career goal so i was hoping to find that here and to find some goal scoring form here."

Before explaining: "Obviously i knew the interest was there from Notts County for quite a while and having spoken to Ian, I've actually been to the stadium like a month ago

"I had a good look around, had a good chat about football. His way in playing is very suited to my playing style so that was always a big factor of me wanting to come here and get this deal done."

Notts County had tried to sign Vincent when Michael Doyle became injured having played against Hornchurch, however, the deal never materialised.

"He’s a talented player who’s had some interesting loan moves which show he’s got the hunger to play. We’ve been impressed with him. Frank can play either as a holding midfielder or as a number eight.

"He covers ground well, he’s left-footed and a good passer of the ball. He suits the way we want to play and has been given a good education in that style at Bournemouth."