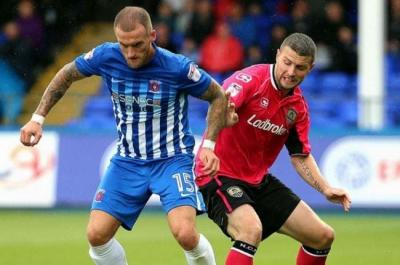 Carl Dickinson has compared Notts County manager Kevin Nolan to Tony Pulis due to their emphasis on organisational play and set pieces.

The 30-year-old won promotion to the Premier League under Pulis with Stoke City in 2008, where the club has remained since.

Now at West Bromwich Albion, Pulis continues to impress, having turned a yo-yo team into an established top-tier side.

“A lot of things the manager has done reminds me of Tony Pulis, especially the organisational part,” Dickinson told the Nottingham Post.

“Pulis was massive on set-plays and organisation and I can see the similarities between them.

“That’s one of the reasons why we were so successful that year at Stoke, and why he’s been successful since.”

Dickinson also spoke of how Nolan has ushered in a camaraderie that was lacking under previous regimes.

“I think the spirit we have is one of the reasons why we are being so successful at the minute,” he added.

“There is a lot of team bonding under the gaffer whereas previously I couldn’t remember doing anything.

“It speaks a lot for where we were before the gaffer came in. We are a tight-knit group, and we have a laugh, but when it comes to training and matches, we are all 100 percent focused and have each other’s backs.”