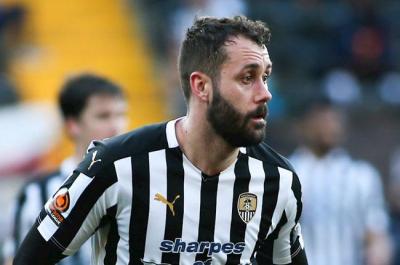 The 29-year-old centre back has become an important part of the heart of the magpies' defence in the last two campaigns at Meadow Lane.

Rawlinson joined the club two summers ago after leaving Port Vale and has become a popular player amongst the supporters'.

Speaking on the clubs official site, Connell Rawlinson said: "Yeah, I'm really happy obviously. I really wanted to stay, over the last couple of years I've really got to know the club well.

"Towards the end of the second year you start to become like a fan, as well as how you see the fans and how passionate they're for the club. You know to play for a club like Notts County, I feel very privileged to have the opportunity to play here like.

"It's a great club, with a great history and the fanbase is brilliant. It's one of the main reasons why I wanted to stay."

Notts County's head coach Ian Burchnall said: "I'm really pleased, Connell's been a big part of our defensive unit for a while now.

"We’ve used him on the right of a back three a lot but I think he can stake his claim in the middle because he’s commanding in the air and a committed defender.

"He’s comfortable on the ball, too, so he can play a variety of roles at the back. He’s another player that wants to show commitment to the club by staying and helping us get out of this division."