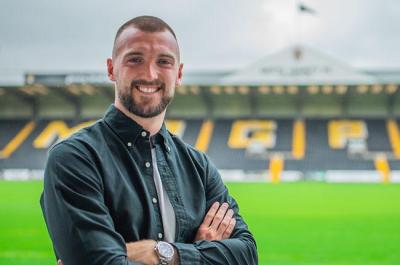 The 24-year-old Northumberland born defender, gained first-team experience with a string on loans at York City, Newport County and Queens of the South amongst others and had become a key figure in the Torquay's defence.

Having featured heavily in their bid to finish within the National league play-offs, he arrives at Meadow Lane on a two-year-deal.

Speaking to on the official clubs' website, he said: "Good, happy to get it all sorted and over with nice and quickly.

"So I can focus and get myself ready to start the season. I liked playing there as a boy and I came out a man, I learnt a lot there at Torquay from the lads and the management team and obviously its managed to get me this move so it's been good." He added.

"I had a few options in the Football League but for what I'm wanting as a player, I'm wanting to develop and get better individually. The facilities and the management team really stood out a lot at Notts and it worked for me best here."

Meanwhile, magpies head coach Ian Burchnall described the signing as a 'real coup' for the club and was delighted that he had secured the club’s first summer signing.

"I strongly believe Kyle can go levels up from here and feel this is a big coup for the club," said the head coach.

"He actually played on the left wing against us in the play-offs, and we were impressed with his ability on the ball. We think he’ll be really comfortable stepping out of defence and, combined with his excellent aerial and defensive capabilities, we’ve got ourselves a top centre-back who suits us perfectly.

"He’s left-footed, too, which adds more balance to our back line, and he’s got fantastic leadership qualities as demonstrated by him filling in as captain at Torquay on numerous occasions."