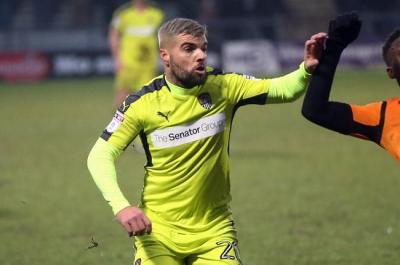 Notts County midfielder Liam Walker has written himself into Gibraltar's history as his late goal against Latvia gave the British Overseas Territory their first ever win as a FIFA nation.

Gibraltar and Latvia faced off in a friendly on Sunday at Victoria Park, the first time the stadium hosted their country's football team in two years.

The last game on the Rock was against the same opposition, on 29 March 2016, and the result on that day was a 5-0 hammering for Gibraltar.

However, the small nation put in a much improved performance against the Baltic nation, which reached the finals of Euro 2004.

Despite a number of setbacks for Gibraltar leading up into the game in terms of injuries, including one to star man Joseph Chipolina in the warm-up, Desi Curry's side were not to be thwarted.

Walker, Gibraltar's record cap holder with 29, curled in a deflected free kick with 88 minutes on the clock to send the crowd into raptures and seal a 1-0 triumph.

It was not only Gibraltar's second ever win as a UEFA nation (following their win over Malta in 2014), it was their first as a FIFA nation, their first success on home soil, and their first win for four years.

And Walker is now his country's top scorer - with three goals!