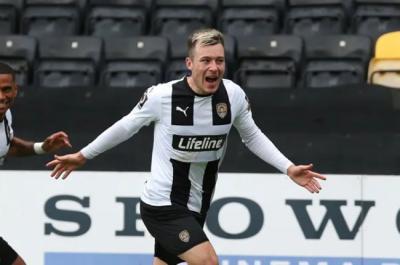 Notts County has confirmed that Cal Roberts is expected to remain at the club until the 2022/23 season after agreeing a new contract extension.

The 23-year-old has impressed for the magpies’ putting together impressive performances and, is excited about the future after putting pen-to-paper on his new deal.

Since arriving at Meadow Lane, the young winger has become a very popular within the Notts faithful and, manager Neal Ardley has been keen to extend Roberts existing deal.

Ardley said via the clubs’ official site; “This gives Cal the knowledge that he’s committed here and that he can focus on helping this club get into the leagues above, You have to protect the asset and at the same time make the player feel like he’s part of a longer-term project.

“Put the two together and that’s where we are. If he does attract interest from elsewhere, the club’s in a strong position.

Adding further, “talk to Cal all the time about how we can give him the tools to be able to do what he does at a high level. The one thing I remind him of is that Premier League and Championship players are super-fit, super-fast and super-athletic – you can’t rest on your laurels because you’re doing well at the lower levels.”

Roberts who has been out of action due to a calf strain has returned to training, took the time to thank the club for their faith into allowing him to do what he has on the pitch.

He said: “Firstly, I’d like to thank the club for repaying me for what I’ve done on the pitch. Like I said when I first came, if I work hard I’ll get the rewards – and I’ve been rewarded with a new contract, so I’m really happy about that.

“Coming here was a no-brainer and signing a new contract is a no-brainer again. The club’s going in the right direction and it’s a great place to be at the minute.

“The gaffer and the lads are brilliant and I enjoy training every day, now we just want to get back to our best after the COVID break.”

On social media, Roberts also took time to tweet “Delighted to be staying till 2023, hopefully see you fans back at Meadow Lane soon”.

The extension shows planning on behalf of the football club, highlighting the stars of Notts County will gain new deals for their positive performances on the pitch.