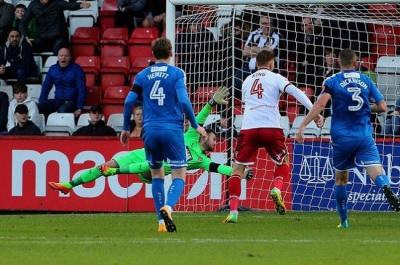 Ross Fitzsimons has expressed his gratitude towards Kevin Nolan and the rest of the Notts County setup for giving him a chance to play first-team football.

The 23-year-old signed on a free transfer in the summer having left Chelmsford City and, prior to his current run of games, had seldom been given an extended run in a club's first team.

However, the goalkeeper has become first-choice since Adam Collin picked up a knee injury against Barnet last month, playing in all but two of Notts' games since.

"I've been close to it before at previous clubs but I have never had the initial break where someone has told me 'Go and play'," Fitzsimons told the official Notts site.

"But straight away after Adam was injured the manager said 'I want you playing' and put his belief in me.

"I owe so much to the manager and his staff - they could have brought in a goalkeeper on an emergency loan who has played 50 games or more.

"But their backing has done my confidence the world of good. I'm getting belief in myself and I think this is one of the happiest times in my footballing career."