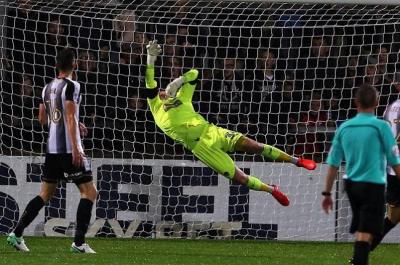 The pair have put pen to paper on extensions that will run until the end of the 2019-20 season.

Fitzsimons played 20 games for the Magpies last season, getting an extended run after now-released Adam Collin suffered an injury.

However, he lost his place in the team after being sent off in a 2-1 defeat to Crawley Town for lashing out at an opposition player.

“At the time [of the Crawley incident] I completely saw red,” Fitzsimons told the official site. “I just didn’t process it in my mind.

“I’m not generally like that – everyone has moments when they act before they think, and unfortunately that was mine.

“After that, I didn’t really have a case to go into the manager’s office and ask why I wasn’t playing because Adam came back in and was outstanding for us.

“The main aim for me now is to come back and try and claim the number-one shirt – and hopefully help the team to top end of the table come the end of next season.

“I was over the moon to hear the manager and his staff wanted to keep me on for an extended period.”

Bird, meanwhile, joined Notts last summer from non-league Dunkirk and made one appearance for the Magpies in a EFL Trophy defeat to Lincoln City.

“From this time last year, a lot of things have changed,” the 19-year-old said.

“I’ve been out on loan [to Alfreton and Leek], so I picked up a good amount of gametime, and hopefully now I’ll kick on into pre-season and see where that takes me from there.