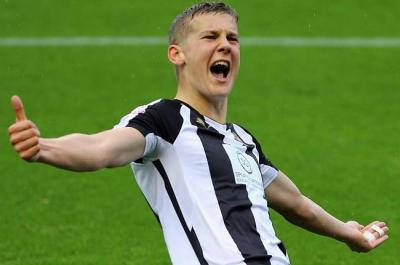 A "buzzing" Ryan Yates hailed Notts County's last-gasp 2-1 win over Colchester United on Saturday and believes the team's strength in attack and mentality was crucial in the final stages of the game to forge more chances.

Shola Ameobi gave the Magpies the lead in the second half via a penalty before Ross Fitzsimons kept out a U's spot kick of their own, but the visitors struck in the 89th minute to seemingly give them a share of the points.

Yates, however, rattled home a header in the 94th minute to claim victory and keep Notts hot on the heels of Luton Town, both teams on the same amount of points but the Hatters' goal difference keeping them top.

"I'm absolutely buzzing," Yates told the Nottingham Post. "We dominated the second half and got sucker-punched on the counter for their goal. But to come back and win shows the spirit of the team.

"They were a good side. They did both sides of the game really well. They were winning more second balls, putting it in behind us and making things difficult.

"We came in disappointed at half-time but had some firm words from the gaffer and put in a better performance in the second half.

"I know the quality in the squad - our attacking players are unbelievable - so there was always going to be another chance. It fell for me and thankfully I've put it in.

"All credit has to go to the boys. Lewis Alessandra has flicked it on and I was in the right place at the right time.

"Seven points from nine is a good return from the week. With the mentality we have, we're gutted not to have the full nine."