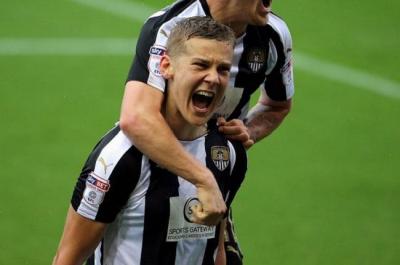 Ryan Yates has stressed that his main role for Notts County is as midfield enforcer, although he wouldn't mind to reach double figures in terms of goals.

The on-loan Nottingham Forest teenager has scored five times so far, making him second-top scorer behind Jorge Grant on 11.

Yates recently hit four goals in five games, including two in the 4-2 victory over Bristol Rovers in the first round of the FA Cup at Meadow Lane.

Despite his purple patch, he remains committed to his role in midfield, breaking up play.

“My dad told me to get 10 goals this year and I was like ‘woah’,” Yates told the Nottingham Post.

“I would love to get double figures because that for a midfielder is unbelievable.

“I know Jorge has already got that, but that would be fantastic for me also.

“But first and foremost my role is to break up the play, but if I can chip in with a few goals then great.

“I’ve had a few chances that I didn’t take and I was a bit gutted not to, so I can’t see why I can’t score more."