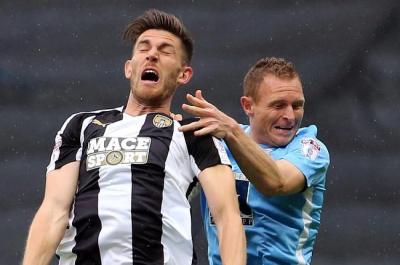 Kevin Nolan has confirmed that Shaun Brisley will not be risked in Notts County's midweek League Two game with Crawley Town.

The 27-year-old, one of the club's most consistent performers this season, was forced off late on in Saturday’s 2-1 defeat to Exeter City due to a dead leg.

Although Richard Duffy is back in training after missing the weekend game at Meadow Lane, the Magpies boss admits that the team "cannot afford" to be without Brisley for more than two games.

“I am disappointed because he has a knock on his leg and he has a bit of a haematoma,” Nolan told the Nottingham Post.

“He feels good within himself, and Tuesday may come a bit too soon for him. We won’t risk him anyway because he’s got to be 100 per cent if he plays.

“If he misses one or two games then that’s fair enough, but we cannot afford it to be any longer. We are just giving him as much time as we possibly can.”