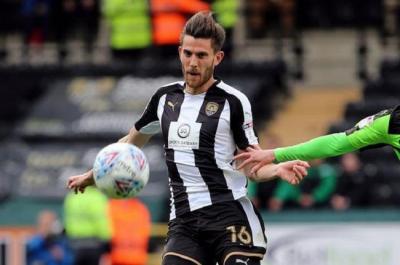 Shaun Brisley wants Notts County to put the disappointment of the defeat at Grimsby Town behind them, keep the momentum going against Luton Town and go into the playoffs full of confidence.

Wycombe Wanderers took third spot in the table as they won their 45th game, while the Magpies fluffed their lines at Blundell Park in a 2-1 loss.

The promoted Hatters await Notts on Saturday in the last game of the regular season and Brisley is eager for his side to make the most of it.

“We obviously wanted to win to take the fight for third spot into the final game,” Brisley told the Nottingham Post. “But we weren’t as good as what we have been in the last three games.

“We’ll take it on the chin and we’ll look forward to the play-offs. It’s important we get back to winning ways against Luton and build momentum going into those extra two games.

“But to be in the play-offs is a great achievement given where the club was last season. We are still in with a chance of promotion, which is the target we set ourselves.

“But there was a sense of frustration about not taking it to the final game. We’ve just got to keep our heads up and go again.”