Shola Ameobi: 'Notts County can mix it with best in League Two' 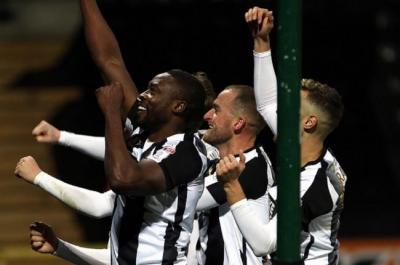 Shola Ameobi has claimed that Notts County were the better side in the 1-1 draw against Luton Town, which proved that the Magpies "can mix it with the best" in League Two.

The Magpies impressed against the table-toppers and, even though they fell behind to Johnny Mullins's header, came from behind to claim a point through Ameobi's reply.

"We knew it was going to be tough and the atmosphere was quite ferocious," the veteran striker told the Notts site. "But I think we dealt with it very well, which showed the character of the players.

"We were disappointed to lose the goal after having so many chances but this side have shown resiliency. We had to dig in at times.

"They're a good side at home but we showed our quality. We're delighted to get a point in the end and it goes to show we can mix it with the best in the league.

"I thought we were the better side. They have a lot of great attacking players but the boys at the back defended unbelievably well and I can't really think of a time when they opened us up.

"It was important that we were solid, which we spoke about before the game, and the guys played them perfectly.

"They've been scoring seven and eight goals against teams here so to limit them to a goal from a set-piece is testament to how hard we worked."