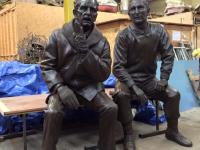 Two historic legends: Jimmy Sirrel and Jack Wheeler will be coming back home to Meadow Lane, as the Statue Fund announce that the fundraising target has been achieved.

Yesterday’s ‘pub to club’ walk in the memory of Jack Wheeler who had sadly passed away back in June 2009, has seen the remaining £500 raised and a total of £633 saw the Statue Fund complete their overall objective.

The statue is cast and the plans are now coming together to see our Notts County legends transported from the foundry in Liver to Meadow Lane by the end of April 2016.”

“Thank you to every single person that has helped, be it from the early conversations and the concept, donating a £, pence or being involved week in, week out.” Before adding, “We would not have done this without you”.

Pride of Nottingham member ‘MagpieJue’ who took part in the walk alongside her Granddaughter Libby aged 7 said, “It was lovely, a nice route down the canal side, Libby completed it too, and it took us 2 hours, which I didn’t think was bad at all.”

“Uncle Colin came to the pub to see us off too, we were all awarded with a certificate of appreciate at the end of the walk, and got copies from the F.A of Jimmy’s coaching credentials”.

The project will now see Jimmy Sirrel and Jack Wheeler immortalised outside Meadow Lane, with fans of all ages being able to enjoy and remember two of the greatest men in the history of the Notts County football club.

Have your say on this brilliant fan achievement below - Also don't forget to check out our content here and if you are not a member - please consider joining.