What's in the rumours!?! 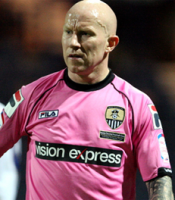 It was early on handing out flyers ahead of the Brentford game on Saturday that I originally heard the rumours surrounding Lee Hughes. I had approached a supporter, who at first seemed interested until he noticed the artwork in the centre of the flyer. He responded by asking if I had heard the 'news' giving no indication as to what he meant. He added 'He's leaving anyway, good riddance if you ask me', I couldn't help but feel disappointed.

Not long after, I overheard a group of fans talking about the circulating rumours. I asked one of them what the news was surrounding Lee Hughes and one of the fans replied 'It's been on the radio, He's handed in a sick note. He'll be gone in January.

I focused on giving out the flyers but it seemed to be getting quite some attention, as I noticed many fans debating it.

During the warm ups, I briefly scanned through themag and noticed Yoann Arquin wasn't listed among the substitutes but I thought nothing of it. (I'm still not sure what to make of it) It seems odd that he would go to get a 'refreshment', especially with the timing but I recall the Jon Harley moment the previous season. It can't be all that weird, surely?

It was after the match the rumours, at least for me appeared to be getting more momentum. I noticed many comments online, around various streams, giving the feeling that fans we're mixed regarding the rumours and only a few appeared to be indecisive of what to think. Now the media are picking up on the story, which is probably going to escalate the matter. The evening post online mentions '"I will be speaking to Lee and we will see where we go from there. As soon as we can get him back available and back into the club the better," was all he would say when quizzed on the matter by the Post.” which would now suggest that Curle was in denial at first.

Either way I look at it, Lee is one of our players and if the rumours are true the club really need to address any possible situation. It would be a shame for him to end his career in doubt, especially considering he's a cult figure at the club.