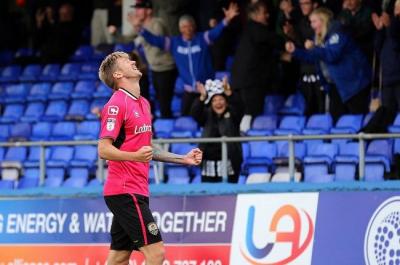 Jon Stead has elaborated on his decision to reject interest from all around the world to sign a new Notts County contract and promised that there is more to come from him next season.

During the 2016-17 campaign, the 34-year-old was the Magpies' highest scorer with 14 goals, and he won the League Two Player of the Month award for September.

There was interest from the United States for Stead, who was sidelined by injury midway through the season, but he has now committed his future to Meadow Lane by signing a new deal believed to be for one more year.

Stead told the Nottingham Post: "(Nolan) was obviously pleased I had signed but he made it clear from the day he walked through the door that he wanted me to be a part of his journey.

"As a player you want to be made to feel important by your manager and that was another reason as to why I decided to stay.

"I made the decision to stay about two-and-a-half weeks ago. I had been on holiday and had also been away from the club for two to three weeks. Being away from everything certainly helped give me clarity to decide what I was going to do.

"And even up until Thursday, I was still getting messages containing offers from clubs across the world. I had a couple in Sweden, then one to play in the Indian Super League, and obviously I spoke to quite a few clubs in America too.

"I just felt in the end that Notts felt right, but it took a lot of sleepless nights. It was not just a big decision for my career, but also my life. It's a massive undertaking to move abroad and I just felt that I wasn't ready to let go of the Football League.

"There's definitely more to come from me next season."