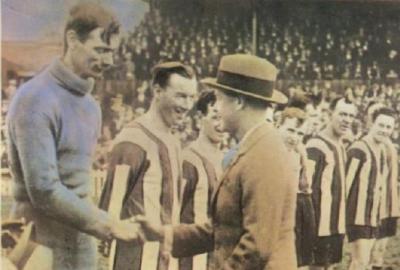 As we know all too well, a footballer's credentials for his club do not always translate into international recognition. And the England squad is littered with such examples over the years.

Take Matt Le Tissier. One of the most talented players the nation has ever produced, he simply wasn't given the chance to do for the Three Lions what he did with Southampton. Likewise Chris Sutton, one half of the SAS strike partnership at Blackburn Rovers, was not really considered by England and only won one cap.

And the same goes for managers - although praising Brian Clough is done so through gritted teeth on this here website, nobody can deny that he was overlooked by England as both a player (he was a prolific forward in his playing days) and as a manager.

But in all fairness, this has been going on for the last century. Between 1905 and 1925, Notts County had on their books arguably the finest goalkeeper in the country, Albert Iremonger, but he never won a single England cap.

Born in Wilford on 15 June 1884, he was one of three siblings, alongside older brother James and younger brother Harry.

Needless to say, the Iremonger brothers were blessed genetically. All of them grew up to be around 6'5" in height, which is considered very tall even nowadays, never mind a century ago when people were considerably shorter.

Indeed, they all became leading footballers of the time, with James playing 301 times for Forest, while Harry turned out 11 times for the Reds, and Albert and James also played cricket for Nottinghamshire.

With regards to Albert, he began with local club Nottingham Jardines Athletic before signing for Notts in 1905 and making his debut against Sheffield Wednesday on April 1.

Seen as a giant with "hands like the claws of a JCB", Iremonger's physique was effectively the template for many future goalkeepers to this day - tall, athletic, strong and imposing, if a little on the skinny side. Think Thibaut Courtois.

And another common goalkeeping trait we see nowadays is temperament - they say you have to be crazy to be in goal, or at the very least display a bit of fire, and indeed, Iremonger was well known to be outspoken on the pitch.

He would often leave his goalmouth to argue decisions made by match officials, sometimes heading all the way up to the centre circle to do so.

If you think this would be a bit excessive nowadays, just imagine how he would have been deemed a century ago, in a much more gentlemanly era. Indeed, this fiery temperament is what supposedly stopped Iremonger from ever winning an England cap.

The Arsenal goalkeeping great Bob Wilson recalled a story about Iremonger, as quoted in The Telegraph: "Iremonger took a penalty and the kick hit the crossbar with such force the ball went back over his head. Iremonger, a lanky stick insect, then raced back to retrieve the ball and in doing so struck a perfect shot into the top corner of his own goal."

There is even an anecdote which claims that, in a 1912 game against Arsenal, he wasted time sitting on the ball in the middle of the game. The referee tried various things, the last hope was to scare him away with a firework (yes, you read that right) but it failed, and the game was abandoned.

However, he also had a kindly side - another Telegraph article, which like the above picture, calls him Albert Ironmonger, claimed he "repelled opposing forwards simply by looking at them and then tossed dolly mixtures to kids in the crowd like a favourite uncle."

But while personality and anecdotes are subjective, Iremonger's stats in the game are undisputable (well, for the most part, as you're about to read on).

He was the Magpies' first-choice goalkeeper for 20 years, played a total of 601 games for them - a record unbroken to this day - and played in over 200 consecutive league and cup games (different sources specify different amounts, but the below cigarette card lists it as 204, so let's go with that).

His exceptional performances earned him a Football League cap in 1912 (back in the days where you'd literally win a cap which could be placed on your head).

When the First World War broke out, Iremonger served in the Footballer's Battalion, a colloquial term for the men who were contracted to football clubs - they were originally refused permission to join the Army but the clubs relented under media pressure - and fought under the badge of the Middlesex Regiment. Iremonger fought alongside brother Harry, and both brothers survived the war.

In 1925, Iremonger's time at Meadow Lane came to an end, and a year later, the 42-year-old became Lincoln City's oldest ever player. Although he was a short-term signing, he impressed in his 35 appearances for the club until 1927, after which he retired from the game.

Later in life, Iremonger became a landlord, first of the Cremorne in the Meadows and later the Ferry Inn in his native Wilford. Unfortunately, tragedy was to strike during the Second World War when his son, 1920-born Albert Harvey Iremonger, was killed in action in 1943 aged just 23.

Iremonger's story ends on 9 March 1958, when he passed away aged 73, but his legacy carries on to this day - the road behind Meadow Lane is named after him.

Sure, he may not have been able to make his mark with England, but let's face it - his place in Notts County and Nottinghamshire sporting history is 100 percent assured. He lived all his life in the region, and he will forever be remembered as a prodigal son of Nottinghamshire.

Share your thoughts about this Notts Alumni feature article about Albert Iremonger on Pride of Nottingham by signing up to the website, visiting the forum and joining in the chat with hundreds of fellow Notts County fans.