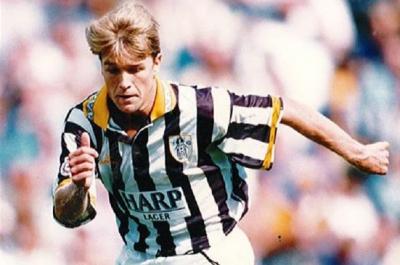 Much is being made recently of the Jamie Vardy phenomenon, that is looking at the non-league for players who are late bloomers and may just have what it takes to flourish at the top, but really it's something that has been going on for years and years.

As a teenager, Legg attended Glan Afan Comprehensive School in Port Talbot. After he left, he worked for the Forestry Commission and later took on a job as a supervisor in a shelving systems factory.

Rather than go through the academy system, Legg played football for local youth side Baglan Boys Club, where his father was manager. He then joined Welsh League side Briton Ferry Athletic, where he attracted attention from several Football League clubs.

Legg first joined Middlesbrough on trial, playing up front alongside Bernie Slaven for the club's reserve side. However, manager Bruce Rioch was unhappy with Legg's hair, describing him as "too scruffy", and told him to cut his hair or to not come back. He chose the latter.

He was instead offered a trial at Manchester City and played for the reserve side, again as a forward, before being asked to return at the start of the following season for pre-season training in order for manager Mel Machin to assess him.

After returning from Manchester, Legg was offered a trial with hometown club Swansea City, playing in a reserve fixture against Cardiff City and, in August 1988, was offered a professional contract by manager Terry Yorath.

A stress fracture of his leg meant he was forced to wait for his professional debut, eventually making his first appearance in a 2–0 defeat to Bristol City.

Legg went on to make 163 appearances for the Swans and helped the club win the Welsh Cup in 1989 and 1991 as well as featuring in the team's European Cup Winners' Cup campaigns, playing against Panathinaikos and AS Monaco.

Legg was very hard working, pacey and gifted with good acceleration, as well as being very skillful, with a good set piece and eye for goal.He was versatile in the way he played, being able to pick up the ball and direct the tempo.

What really made Legg world-famous (literally) was his long throw, which made Rory Delap's missiles seem wimpy in comparison. He could regularly throw the ball over 30m and once held the world record with a distance of 44.6m!

He was at Meadow Lane until 1996, during which he helped the club win the Anglo-Italian Cup, in 1994-95, and made 89 appearances in total, scoring nine goals.

Along with Paul Devlin, Legg was sold to Birmingham City in February 1996, remaining there until 1998, and during this time he won the first of six caps for Wales, on 24 April 1996 in a defeat to Switzerland.

A short spell at Reading followed, before he found the club where he would tally up the most appearances, Cardiff City. He joined in 1998 and stayed there until 2003, making 175 appearances and scoring 12 times.

Legg's time at Ninian Park saw him initially hated by fans, due to his previous spell at Swansea, but he soon won them over, winning the club's player of the season award in 1999/00 and 2000/01.

During this time, in 1999, his wife Lucy noticed a lump on his neck which was later diagnosed as a non-malignant tumour, which he had removed at the end of the season.

Later on in Legg's life, the health issue arose again when at Peterborough United, a second lump appearing in his throat in 2005.

This time, it was more serious, and though he initially decided to wait again until the end of the season, he was hit in the neck by an elbow from Neil Kilkenny and it began causing him pain for the first time, so he booked himself in for the operation in April 2005.

The operation to remove it was successful, although he was forced to undergo a 28-session course of radiation therapy, and Legg was able to return to football, despite having believed that he would be forced to retire.

Since then, Legg plied his trade in Wales as player, manager, or both - save for a season at Hucknall Town in 2006/07 - until 2012, when he hung up his boots and worked exclusively as a manager, though he has often returned to Nottingham to play in charity games.

The next stage of Legg's career began on 6 July 2017, when he rejoined Cardiff City as part of their Under-23s lead coaching staff.

A legend for two rival clubs and in the English Midlands, Andy Legg will always be welcome back at Meadow Lane.