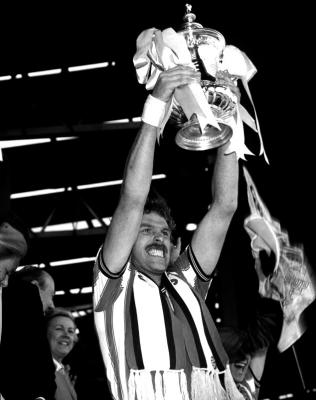 Football is a sport of many styles, many methods, many tactics, many demographics. It’s one of the most inclusive sports in the world, which adds to its global appeal.

You can carve out a career if you’re a skinny 5’5’’ tactician and you can become a star if you’re a 6’6’’ giant built like a brick outhouse. You can be elegant and refined, or you can be uncompromising and sturdy.

Lionel Messi, Nobby Styles, Yaya Toure and Peter Crouch have all been capped multiple times for their respective international teams despite widely differing heights, builds and styles of play.

Brian Kilcline, English centre-back and former Notts County and Coventry legend, was able to get his hands on top-level silverware and forged a highly successful career in the English game, thanks to his tough, uncompromising style, which spread to his appearance – his long hair and beard, combined with his demeanour and passion, ensured that opposition players knew he wasn’t one to mess with.

Born on 7 May 1962, Kilcline began his footballing career with Notts County at the tender age of 16 after being scouted for South Notts Schoolboys, when he signed associate schoolboy forms in 1978.

He got arguably the best birthday present a young aspiring footballer could hope for when he signed a professional contract in 1980, though he already had senior team experience by this point.

He made his professional debut for Notts nine months earlier against Torquay United in the League Cup, before appearing in the league against Bristol Rovers a month later.

Kilcline made 184 League and Cup appearances, and was a key player in the squad that took Notts into the First Division in 1981. A strong, uncompromising defender with a Neanderthalesque appearance, he was the bane of opposition frontlines.

In the summer of 1984, Notts were relegated from the First Division, but Kilcline had the chance to remain in the top flight when Coventry City enquired about the tough tackler. The Sky Blues paid the Magpies £60,000 to secure Killer’s services, putting an end to his time at Meadow Lane.

Over at Highfield Road, Kilcline showed the same commitment and skills that served him so well at NG2, and was eventually made captain of the side.

Arguably his greatest moment in a Coventry jersey came 30 years ago, in 1987, when he led the Sky Blues out at Wembley in the FA Cup final, against highly fancied Tottenham Hotspur.

During the game, which finished 2-2 in normal time, such was his eagerness and drive that he ended up receiving an injury after a tackle on opposition player Gary Mabbutt and had to be substituted before the end of the regulation 90 minutes.

According to an interview, he ended up suffering from a blood clot in his leg and, despite it being a sunny day, he “watched extra-time through thick fog because I was sat beside our two doctors, who were chain smoking to calm their nerves”.

Mabbutt then scored the winner… for Coventry, that is, as he kneed the ball into his own net in the 95th minute. The underdogs then weathered the subsequent Spurs attacks to secure a 3-2 win and, crucially, the fabled, precious FA Cup.

Despite his injury, Kilcline was able to slowly hobble up the famous Wembley step to receive the trophy for the first time in Coventry's history.

Killer recalled an amusing anecdote about the aftermath of the game to The Mirror, where he had to spend time in hospital and wasn’t able to celebrate the cup win.

“We came back to Coventry, showed off the Cup, and I was straight out of the back door at the town hall and off to hospital. All the lads went on an end-of-season trip to Magaluf except me.

“There was no get well-soon card, just a gloating phone call from Dave Bennett and Cyrille Regis to say what a brilliant time they were having. I thought: 'You jammy b******s, I'm not having this' - so I flew out three days later and did my own exhaustive research of Magaluf's licensed premises!”

Oldham Athletic came in for Kilcline in the summer of 1991, paying Coventry a fee of £400,000. However, his time at Boundary Park didn’t work out, so he found himself upping sticks when former England legend Kevin Keegan, now manager of Newcastle United, enquired about his services. Killer duly became Kleine Kevin’s first signing with the (other) Magpies.

During five years at St James' Park, he captained Newcastle to the First Division title in 1993. Keegan later remarked that Kilcline was the most important signing he had ever made for the club. This was echoed by fans, who considered him partially responsible for saving the club from relegation and possible bankruptcy.

During the 1993-94 season, he briefly played for Swindon Town in the Premier -League, before returning to Nottinghamshire for a two-year spell with Mansfield Town, where he made 50 appearances.

His final season was that of 1997-98, where he had a brief spell with eventual Conference champions Halifax Town, before hanging up his boots.

According to The Mirror, Kilcline went backpacking around the world with his wife once his career wound down, then spent time with National Express as an ambassador and became involved in property renovation in Britain and overseas.

With 2017 signaling the 30-year anniversary of Kilcline lifting the FA Cup, the tall, eccentric now-55-year-old was interviewed by the Guardian in March, where he divulged several new anecdotes, including living on a boat, getting married the day after the Swindon Town Christmas night out, where he was found worse for wear outside the town's train station, taking wedding pictures in a graveyard, arm-wrestling Kanu, and setting up home in Holmfirth where he lives with his wife Lynn.

And in true Killer spirit, he shares the house with an eight-foot dragon and a mermaid.

Share your thoughts about this Notts Alumni feature about Brian Kilcline on Pride of Nottingham by signing up to the website, visiting the forum and joining in the chat with hundreds of fellow Notts County fans.