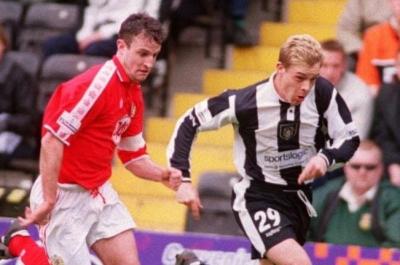 Football, as we all know, is the global game. From the beaches of Tahiti to the tundras of the Arctic circle, the language of football is understood everywhere.

As a result, the number of air miles involved in the game is staggering, as players, teams and fans travel all around the world for the sake of football.

A study by online moving platform Movinga ranked the footballers who have clocked up the most air miles in terms of transfers (and therefore, relocations), and a very familiar name for Notts County fans makes the top 10.

Danny Allsopp, one of the Magpies' top strikers of the 21st century, is number six on the list, having registered a staggering 46,777 miles throughout his career.

Born on 10 August 1978 in Melbourne, Allsopp began his journey (in more ways than one) in football with provincial club Monbulk Rangers in 1994 as a 16-year-old, competing in the Victorian Provisional League Division 1.

He worked up the ranks of Australian football/soccer as he joined Croydon City Arrows in the Victorian State League Division 1 before joining then-NSL club South Melbourne in 1995.

After two seasons there, Allsopp made the move across town to Carlton SC for the 1997 NSL season, before spending the 1998 Victorian Premier League season with Port Melbourne Sharks

And then, his globetrotting began, as he travelled halfway round the world to England, for a trial with Manchester City. A long way just for a try-out, but he proved his quality to the Citizens, scoring in a pre-season friendly against Newquay and some reserve matches, and was duly snapped up for the 1998-99 season.

At the time, Man City were not the force they are today - in fact, they had slipped to the Second Division, but Allsopp played a bit-part role in helping them claw themselves back up to the first, with four goals in 25 games.

Ultimately, he struggled to find a regular place in the team during the 1999–2000 season, and was loaned out to Notts County.

His first spell at Meadow Lane was short, scoring once in three appearances, and also spent time on loan at Wrexham and Bristol Rovers, but in 2000, another loan spell - this time more fruitful with four goals in three matches - saw him eventually snapped up for £300,000.

During the 2000/01 season, Allsopp formed a formidable strike partnership with Mark Stallard, the former scoring 13 goals to complement the latter's 17 in the league (23 in all competitions) as the Magpies finished eighth in Division Two.

The following season proved more of a struggle for Notts, finishing 19th in the league, just six points clear of relegation, but Allsopp once again impressed in front of goal, banging in 19 goals in the league and a further nine in cup competitions - most notably a hat-trick against Mansfield Town and a penalty against former club Man City - dethroning Stallard as top scorer for the club.

In 2002/03, Allsopp did not quite reach the heights of the previous campaign, but still broke into double figures as the club finished 15th in the third tier. Sadly, that was to be the end of the road at Notts - in financial dire straits at that time - for Allsopp, as he upped sticks for a stint at fourth-tier Hull City.

As it would turn out, the two clubs would switch places at the end of the 2003/04 season, Allsopp's 15 league goals (second top goalscorer behind future Notts alumni Ben Burgess, with 18)  seeing the Tigers finish second in Division Three, while over in the Midlands, things unravelled as the Magpies finished 23rd in Division Two.

In 2005, Allsopp would opt for a return to his hometown, penning a deal with Melbourne Victory and beginning a relationship with the A-League club that would see him become a cult hero at the Melbourne Rectangular Stadium (and sometimes the Docklands/Etihad Stadium).

Though he struggled in his first season back Down Under, managing just three goals in 20 starts during the 2005/06 season, he got back into his stride the following year, finishing the season as the A-League's Golden Boot winner as Victory won the championship.

His first stint at Victory would last until 2009, when he tried his luck in Qatar with Al-Rayyan and in the United States with Major League Soccer side DC United.

However, Allsopp soon returned to the lure of home and signed again for Victory in 2010 after mutually agreeing to terminate his contract with DC, where he signed until 2013, but he shocked his teammates on 18 October 2012 when, after a training session, announced his retirement from professional football.

Over the next few years, Allsopp would continue to play in the Australian lower leagues, with boyhood club Croydon City Arrows and two games as a guest player with Tasmanian side Launceston City.

Since retirement, Allsopp has gone from the pitch to the office, his LinkedIn page listing him as working as a sales representative for Hospeco, a global leader in hygiene and commercial cleaning products, but continues to be involved in football from time to time.

For his exploits both in England and in Australia, Danny Allsopp will always be fondly remembered as a quality striker - and let's hope he made use of an Air Miles card throughout his career!